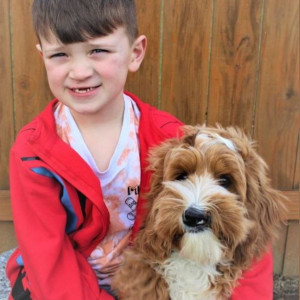 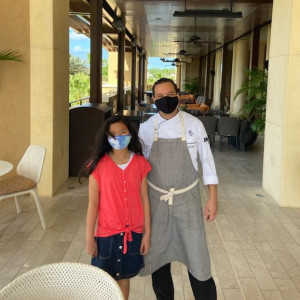 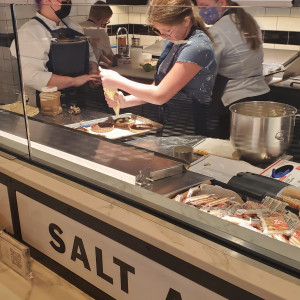 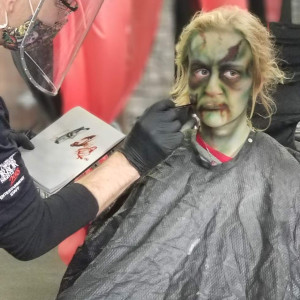 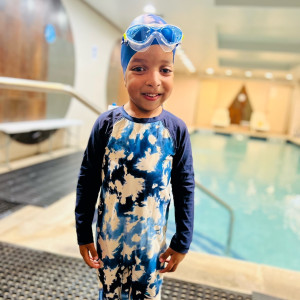 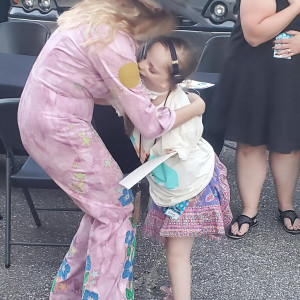 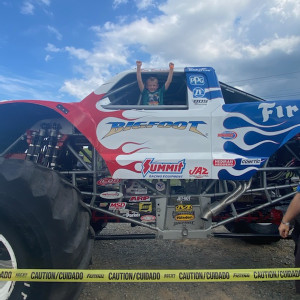 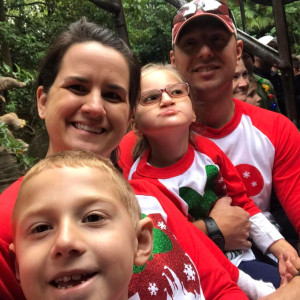 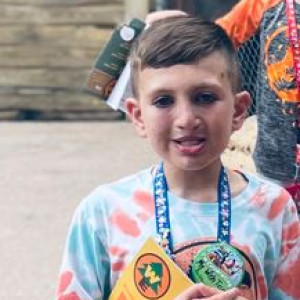 Asher (and Auggie)
Asher is a 7 year old who was born with a unilateral cleft lip and palate. Asher’s best bud (and cleft buddy) is Auggie, a 6-month-old Australian Labradoodle puppy that was born with a unilateral cleft lip, too! Both Asher and Auggie are rambunctious, always ready to play, and love to watch tv together! Asher has had 3 craniofacial surgeries plus ear tubes by the time he was 11 months old. Asher has 4 older brothers and 1 younger sister. He can make friends anywhere he goes. He is extremely outgoing and enjoys playing with his friends at school, home or church. Asher loves dinosaurs, the Avengers, baseball, and is learning to play the guitar. He loves to sit and play music with his dad. Asher knows his cleft makes him unique and strong!
Asher's family was able to adopt Auggie on Dec 1st, 2020 and Asher’s dad flew to California to pick him up. When they were notified that Auggie was available for adoption, they knew they had to make this happen for their family and their local cleft community.

Kassidey
Kassidey was born with a Bilateral Cleft Lip and Palate. Kassidey has 4 siblings, 1 sibling that was diagnosed with Spina Bifida as an infant, and another sibling that was diagnosed with cancer as an infant. In 2016, Kassidey's father passed away from cancer, and 3 short months later, her paternal grandmother also passed from cancer.
Kassidey has had a difficult journey, including several surgeries of her own, but she has always radiated joy. Kassidey is described as having "the most amazingly caring heart".
Magical Moments Foundation made all of her dreams come true! Magical Moments Foundation was able to provide Kassidey (and her younger brother, Owen) a fun-filled, inspiring weekend that they will NEVER forget.

Ava was born with a severe bilateral cleft lip and palate and a congenital limb amputation due to amniotic band syndrome.  Having undergone multiple reconstructive surgical procedures, Ava is kind, resilient, and simply amazing!  She dreams of someday writing and producing horror films, and her wish was to learn about how such movies are made.  This Halloween, Magical Moments Foundation connected Ava with director/writer Chris and makeup artist Skeet of Universal Studios.  During her private behind-the-scenes experience at Universal, Ava learned all about horror movie magic as she was inspired and encouraged to follow her biggest dreams!  Nothing can hold her back!

Julien is an intelligent, loving, and resilient 4-year-old boy with a big sense of humor! Julien was born with Crouzon Syndrome. Since the age of 6 months, Julien has undergone 17 surgeries and countless hospitalizations due to his craniofacial condition. He has been a warrior since birth, having been born at 30 weeks, and has championed through each medical obstacle he has faced. His medical conditions do not stop him from being active (when medically possible); and inquisitive, as he loves to explore, sing & dance, and pretend-play. Julien is well-known and loved at his treating hospital, as most of the staff has had the privilege of seeing Julien grow up. Julien loves karate and aspires to be a ninja when he grows up! Julien also enjoys swimming and swimming helps further develop his motor skills!

Lauren was born with Nager Syndrome. From early on in the NICU, her family realized that Lauren responded with music, specifically listening to the singer, Jewel! She found solace in music. As Lauren got older, she started asking questions about the lyrics and what the words meant. This inspired Lauren. She started writing her own lyrics and dreams of becoming a singer/songwriter like Jewel. Lauren's magical moment was to meet Jewel... Her magical moment came true!

Levi
Levi is a charming 6-year-old boy born with a Cleft Lip and Palate! Levi has had 3 surgeries so far and is the most resilient little boy. He's getting ready to start Kindergarten and is eager to make new friends! For Levi's magical moment, he wanted to experience what it would be like to be a monster truck driver!
Magical Moments Foundation made that wish come true! Levi and his family spent some time at the Charolette Motor Speedway Track in NC, and while there, he met with real monster truck drivers, had a complete VIP experience (complete with a ride-a-long in a monster truck), attended the Circle K Monster Truck Bash, and was treated to weekend filled with fun surprises! Levi received special gifts along the way including dinner at the track the night prior, plenty of souvenirs, and even a day at Great Wolf Lodge!

Michaela was born on April 28, 2016, at birth we found out that she was born with a complete bilateral cleft lip and palate. Michaela was born at St. Ann’s Hospital, by the evening Nancy from Nationwide Children's Hospital came to educate us how to feed Michaela and gave us lots of helpful information about her cleft lip and palate. Michaela had several appointments her first year of life to undergo and fix her lip and palate. At 3 and 6 months her lip was repaired. At 11 months Michaela’s palate was repaired. Around 3 Michaela had her fistulas repaired. Dr. Kirschner was a huge part of Michaela’s team. They have touched our lives and became like friends. Now as the years go on we check in once a year. Michaela will have her next surgery in the next couple of years, the bone graph. Along with having the cleft lip and palate, Michaela has many more obstacles she has faced in the short 5 years of her life almost 6. Michaela had a hard time with feeding, failure to thrive, at 3.5 months old she had a feeding tube placed. Michaela started having seizures a week after her tube was placed, seizure free for over 5 years but still has abnormal EEGS. Ventriculomegaly of the brain, microcephaly. At 9 months we found out that she had CVI, Cortical Vision Impairment. Risk for aspiration, she eats honey thick consistency baby food. Quadriplegic infantile cerebral palsy, severe intellectual disability. Just had VDRO (Varus DE rotation Osteotomy), Bilateral Pelvic Osteotomy and Adductor Release to fix her hip dysplasia. Michaela is a very busy girl with seeing over 20 specialists and doing multiple therapies a week at Nationwide and at school.

My husband and I found out at my 20-week ultrasound that Devin was going to be born with the same birth defect I was born with, cleft lip and palate. Until that moment we didn't know it was genetic
seeing as I was the first person in my family to be born with that birth defect. It wasn't until we
met our little guy that we found out that he would receive another difficult diagnosis. Devin was also born with Sturge Weber Syndrome. He has a very diffuse port wine stain over his face and various areas on his body. Along with the port wine stain he has severe glaucoma and is almost at the point of needing surgery as the medication is not strong enough for how severe it is. When he was first born, he had as many as 4 doctor's appointments a week between the two diagnoses. For the Sturge Weber diagnosis, Devin has had countless procedures under sedation for laser treatments and to closely assess his eyes. In treatment for his Cleft Palate Devin has already had 3 big surgeries. He is now undergoing the orthodontic process. Devin also struggles with anxiety and ADHD. This has made his journey that much more difficult for him. Despite all of his differences Devin has remained a very joyful, loving and kind child.